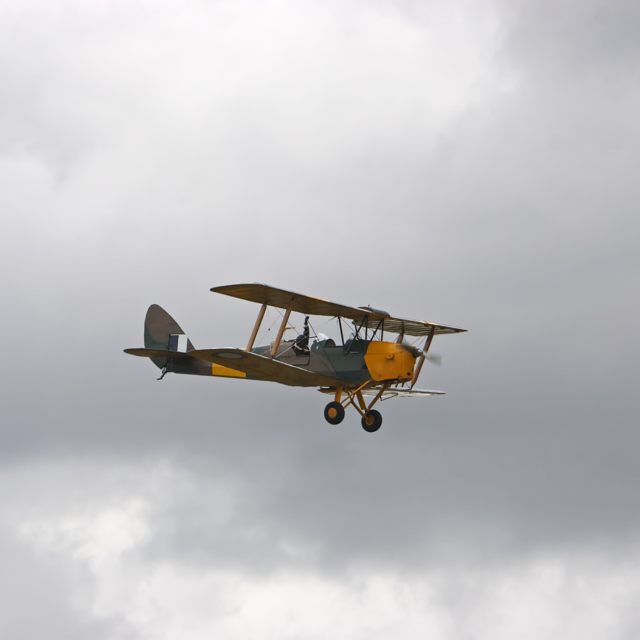 Do Your Designs Take Flight & Soar?

Synopsis: Achieving first entry in new markets would appear to provide you with a first mover advantage. But if you are not prepared to continuously improve your product, you leave your firm open to more nimble & pragmatic competitors. We look at the traits of the Wright Brothers & Glenn Curtiss. All three set out to design, build and personally pilot planes that would repeatedly beat powered flight records, in distance, time of flight, speed, or altitude. Yet there were differences in where their management focus took them, after having established their reputation within the fledgling, global aeronautics community.

Start-ups and newly minted corporate project teams can encounter problems similar to that experienced by both the Wright Brothers and Glenn Curtiss, particularly if they are successful. Patent protection sirens can divert attention from continuing to advance product engineering. We’ve also seen from first-hand interaction with start-ups that it’s easy for company founders to slip away from their engineering strengths to more glamorous, but less successful marketing and executive roles. Such role changes can jeopardize their firm sustaining any early engineering advantages acquired.

In the United States, three early native aircraft inventors & pilots stand out. Orville & Wilbur Wright established controlled, powered human flight in late 1903. Glenn Curtiss entered aeronautics initially in 1904, providing an engine to power a dirigible. Later, in 1908, Curtiss providing an engine to power the Aerial Experiment Association’s first biplane, founded by Alexander Graham Bell. In 1907, Curtiss was the fastest man in the world (beating even the fastest automobile), setting a speed record of 136 mph, riding a motorcycle with a V8 engine that he personally developed.

As both pilot and aircraft developer, Curtiss was able to demonstrate the inherent superiority of ailerons over wing warping (used by the Wright brothers) for better aircraft control. He went on to introduce hydroplanes that were used by the US Navy, in addition to his firm introducing an enclosed cockpit-which became a standard in aviation by World War I.

While the three aviation pioneers were highly recognized for their contributions to flight, their personal relationship soured when the Wright brothers sought to impose stiff licensing requirements on all domestic and foreign aircraft designs.

Is your firm’s engineering ‘aerodrome’ well-staffed & managed? Can it both conceive and release top-gun products to keep your firm’s competitors at a distance?

If not, why not schedule a complimentary 45-minute free consult session?  We can together review your specific recruitment needs and better understand what’s holding your firm back from a successful hire. I’m certain I can provide you with two or three ideas that can improve your firm’s performance.

If your needs are time-sensitive, we can source & present you with well-qualified candidates for open engineering positions in thirty days, or less. That’s guaranteed in our Statement of Work. Our clients can fill that those missing vital employee positions needed to more reliably accelerate their product releases.

Most leaders simply call me at 702.623.0443, or email me directly: minda@informativerecruiting.com

The Stealth Brothers: Triumphant in Flight & Disastrous in Marketing

Orville and Wilber Wright were the first aircraft designers to engage in a comprehensive process of understanding glider aerodynamics, rigorously testing, documenting & assessing performance results, using scale models for wind tunnel tests and full-scale tests. This advance work paved the way to success at Kitty Hawk late in 1903, with an engine powered, controlled flight, with each brother performing the role as pilot.

As we examine the talents of the Wright brothers, look for any parallels with your firm’s founders and engineering team members.

All the above-disciplined talents contributed to their success at Kitty Hawk on Dec 17. acquiring an initial first mover advantage.

Unfortunately, their business momentum went off course when the brothers attempted to create & invoke patents while downplaying their involvement in major US and European flight competitions.

In March 1908, the Aerial Experimental Association (AEA), led by Alexander Graham Bell took flight in their Red Wing biplane, traveling “more than 300 feet”. While modest, the AEA persisted Trying to better that modest inroad into flight, Thomas Baldwin–with the AEA jointly developed with Glenn Curtiss the White Wing, powered by a Curtiss engine. This May flight, with Curtiss as the pilot, traveled 1,017 feet. With Curtiss having designed ailerons & White Wing having had a series of successful flights, Bell & the AEA moved to file a patent. Curtiss is credited for having also introduced a steering wheel (replacing levers) to more deftly controlled flights, as well as incorporating wheels, allowing planes to take off and land more readily under its own power.

In 1907, Curtiss approached the Wright brothers and offered at no charge an engine of his design for possible use in future Wright aircraft. Having the offer declined and the opportunity to work with the AEA provided Curtiss with an avenue to become more active in total aircraft design, development, and manufacture.

The approach taken by Curtiss & his firm’s employees rapidly introducing new innovations in aircraft produced earned him the title of “Father of Naval Aviation”.

Being first to create something new in the B2B or B2C space, or generating patents is no guarantee that a firm will succeed. Firms depending on their founding engineer developers to capably perform multiple non-engineering roles (as did the Wright brothers) can be a recipe for failure or limited success.

Development projects started, halted and re-started, to accommodate founders switching the business hats, or having ebbs and flows of funding leaves open a clear path for competitors. Somewhere around the globe, there are imaginative people and resources ready to jump into new business opportunities. It seems better to have a strategy that maintains a strong offensive position, driving your products forward, as had been the approach used by Glenn Curtiss & his product engineering and manufacturing team. This places a premium on acquiring and retaining engineers who can consistently deliver results desired.

What kind of records are you setting in your industry, with your products? Do you engineers with a track record of successful design work to keep pace with your targeted product releases?

Best wishes as you prepare for your next ‘race’.

Starting in June, we cover topics that we feel can inspire, and encourage you to step out of your comfort zone. Many of our blogs will segue into recruiting issues, processes and recommended action. Others will cover business strategies in general and team building.

We know key employees leave their companies when their firm’s leadership repeatedly falters. Common themes we hear from our candidates include:

What we find is that the above themes commonly appear in wars and in sports. They also are seen by inventors as obstructions that need to be confronted head on. So we decided to cover battles, inventors experience, and sports for the first three weeks of each month. Something was missing though. Time away from work that was valued by some of the most successful inventors and business leaders early this century. Thanks to a trip to the Thomas Edison Museum in Fort Myers Florida earlier this year, we were reminded of the incredible value of active idea sharing. Edison, Firestone, and Ford shared campfires together. We should too!

Something was missing though. Time away from work that was valued by some of the most successful inventors and business leaders early this century. Thanks to a trip to the Thomas Edison Museum in Fort Myers Florida earlier this year, we were reminded of the incredible value of active idea sharing. Edison, Firestone, and Ford shared ideas and campfires together. We should too!

What’s in store each month:

Week 1 — We cover military history. There are numerous parallels to operating a business, beating adversaries that may have more resources available, but have chinks in their armor. We go after those chinks, as in our review of the Battle of Coral Sea.
Week 2 – We profile an inventor who has profoundly and positively changed our lives. Look for takeaways on how these individuals (like Glen Curtiss or the Wright brothers) don’t fit the typical HR job requirements mold. How do you make ensure your firm doesn’t turn away exceptionally talented individuals?
Week 3 — We shift into sports that are relevant to what’s going on today. We at times find Giants that are not readily recognized or appreciated. We look at these game changers.
Week 4 — Engineering & Science needs inspiration outside the confines of our ‘normal’ work. It’s not far away and can be fun. We recently examined Baroque music, resolving dissonant voices in product development.
Week 5 — We look back on recent blogs, adding latent observations, examining connections that cross business, engineering, the sciences and the arts. If you missed previous weeks, it’s easy to see what you may have missed. 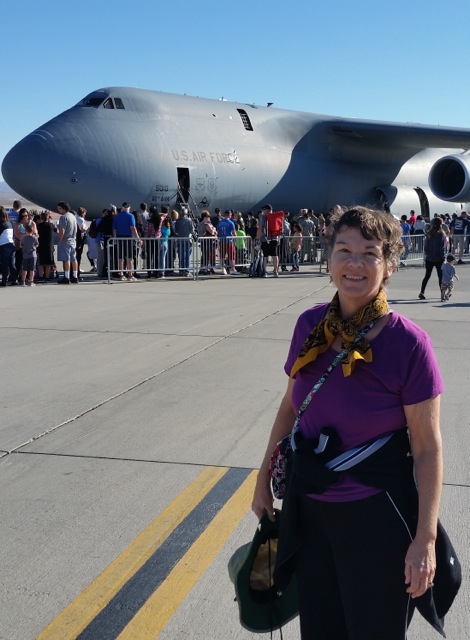 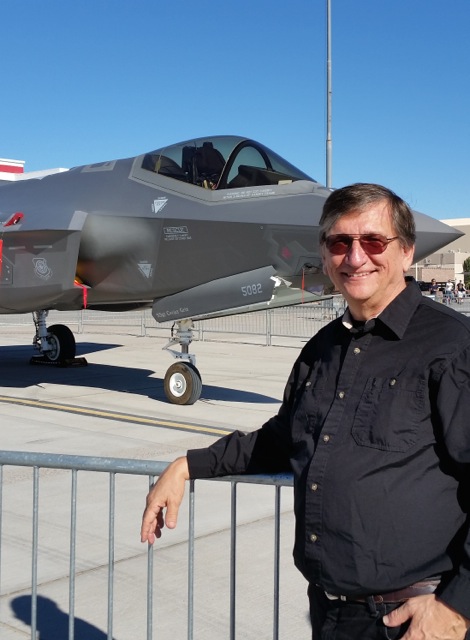 Minda and I joined aviation enthusiasts at Nellis Airforce Base this last November, viewing aerial acrobatics and aircraft on display. Jet fighters including the most recent F22 fighter addition–behind Al and a C5A heavy lift transport behind Minda were just a few of the many aircraft on display. While we regularly have the Thunderbirds flying over our home, en route or returning from practice sessions, we saw them much closer, on the flight line.

Many thanks for the service men & women in our current Armed Forces, as well as their families.
We extend to you our Memorial Day wishes!